It seems that Webb Pierce recorded more than his fair share of songs that just cried out for answer songs. This is probably because much of his recorded work deals with classic country song subjects. For example, in an earlier post we covered one of his songs about infidelity. Today, it’s a song about another classic country subject: Alcohol Abuse.

By the time he recorded “There Stands the Glass” in 1953, Music Row in Nashville was already cranked and loaded. The songwriting credits at the time seemed more like law firms that creative artists. This song, for example, was written by Hull, Shurtz and Greisham. Oddly, though at the time, women singers were struggling to break into the charts, the offices of Music Row were filled with women writers. Shurtz and Greisham were both women. The song was first recorded in 1952 by Blaine Smith, but Pierce had the Midas Touch and his version a year later spent 27 weeks on the charts, 12 of those at Number One. 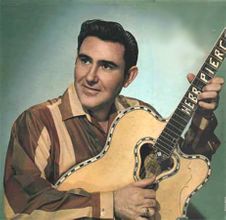 The answer came late that year, being recorded on December 21, 1953. It came from an unusual place: The Pinetree State. The song was written by the same trio that wrote the Pierce song, with the addition of someone named Wellman. The artist was Betty Cody who, at the time was under contract to RCA Victor. She was born Rita Francis Cote, in Sherbrooke, Quebec. As a child she moved to Auburn, Maine and lived most of her adult life in Lewiston. In 1940, she married Harold Breau, who led a band called the Lone Pine Mountaineers and became known as Hal Lone Pine. She broke into the business, on the radio, with Curly and The Country Boys, broadcasting out of Lewiston. Upon marrying Hal, she took the name Betty and anglicized her last name to Cody. They both ended up with RCA and each had minor solo hits, with their duos being a bit more successful.  They toured extensively in Canada, New England, and down the eastern seaboard of the US. Before moving, briefly, to Manatoba and divorcing, they had four sons, two of whom became musicians. The eldest, Lenny Breau, performed with his folks as Lone Pine Jr. before going on to become a world renown Jazz Guitarist. Much like his father, his life was dogged by drug and alcohol abuse and he died in California under mysterious circumstances. His death was investigated by police who could reach no conclusion as to whether it was suicide, murder or misadventure. Denny, the other guitar playing son, remained in Maine where he is a folk and country guitar legend. You can read more about him here. Betty passed away on Canada Day 2014. She was a wonderful person and I was thrilled to know her in her later years.

As promised in the previous post, here are The Bluegrass Gentlemen (aka Red Cravens and the Bray Brothers) with their version of another Webb Pierce classic. Written by Horace Whittley and released in December of 1962, Webb’s recording spent a brief time on the charts topping out at #5.

Tomorrow – Betty Cody answers a classic Country song by the Davis Sisters, who are a fascinating and tragic story onto themselves.