In the 1950’s it was still called Country & Western Music, the big stars were all men, and they all dressed like this:

That’s Webb Pierce and his Silver Dollar Car. Yes, those are Silver Dollars, but remember that they were only worth a dollar each when the car was built. And he had two built that way. You can find one of them at the Alabama Music Hall of Fame. I can’t figure out where the other one ended up, if it still exists. After a year on the Louisiana Hayride, he moved to Nashville where he spent a reputed $30,000 to build a guitar shaped swimming pool. This caused Chet Atkins to quip “I got a swimin’ pool shaped like a guitar…. amplifier.”

During the 50s alone he charted some 50 songs with 14 of those spending significant time at Number One. His third #1, released in 1952, was a cheatin’ song written by Billy Wallace and Jimmy Rule. Oddly, the song had first been pitched to Hank Williams, but his publisher/manager, Fred Rose, wouldn’t let him record it because it was too “risqué.” Williams still liked the song, and sang it on his “Mother’s Best” Radio Show. That’s how Pierce first heard it.

As you can read about here, Kitty Wells had scored a major success with “It Wasn’t Good Who Made Honky Tonk Angels” in answer Hank Thompson’s recording of “The Wild Side of Life” so a few months after “Back Street Affair” hit the charts, she recorded “Paying for That Back Street Affair.” It was written by the same Wallace and Rule who wrote the original and, no fools they, pitched it to Wells. It wasn’t quite the hit that “Honky Tonk Angels” became but it still worth a listen. 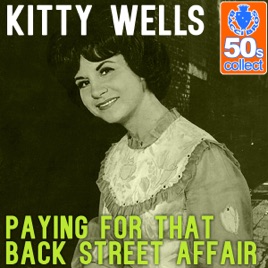 A little more about Webb Pierce:

Many of you probably know that I’m an old car guy. That is, an old guy who likes old cars. Like many large guys (I’m the size of an average Frigidaire) I’m fascinated by miniatures, especially mini-cars, so I’m including this picture of one of Webb’s other cars. A Stan Lee “No-Prize” to the first person who can name the model and manufacturer in the comments.

I have no idea if there had been a Sputnik I and a Sputnik II, and I’ve been trying, unsuccessfully, for years, to find out if this car still exists, and if it does, where it is.

Even though I make banjo jokes (How long does it take to tune a banjo? No one knows.) I’m a major Bluegrass fan, so I thought I’d include a Bluegrass version of one of Pierce’s classic tunes. He recorded this one in 1959. It had a brief run on the charts topping out at a modest 17. It was the b-side of “I Ain’t Never” which briefly hit Number One. Both sides were co-written by Mel Tillis. This version is from a band called, at the time, The Bluegrass Gentlemen. They recorded one album for Liberty which remains one of the rarer BG albums of all time. They later recorded for Rounder as Red Cravens and the Bray Brothers. As a young man, John Hartford had apprenticed with them as a fiddle player. PS – There is a later group from North Carolina also called the Bluegrass Gentlemen. Don’t get the two confused.

Tomorrow – A classic song about a classic Country Music subject: alcohol abuse, by Webb Pierce, with an answer song by a Maine Country Music legend. Plus, if you’re good, another Bluegrass Gentlemen version of a Pierce hit.