It seems that in Country Music, much like Professional Wrestling, sister (or brother) acts are often not related. Such was the case of the Davis Sisters. Betty Jack Davis met Mary Frances Penick while they were in high school in 1947. They began singing together and, brother duets being all the rage, became The Davis Sisters with Mary Frances taking the name Skeeter Davis.

After a single recording session for Detroit’s Fortune label in 1952 they landed a contract with RCA the next year. Their first session for the label featured Chet Atkins on lead guitar, Jerry Byrd on Steel, and Hal Smith on Fiddle. One of the five tracks recorded on May 23rd, 1953 was this wonderfully Old Timey sounding song written by Cecil Null. 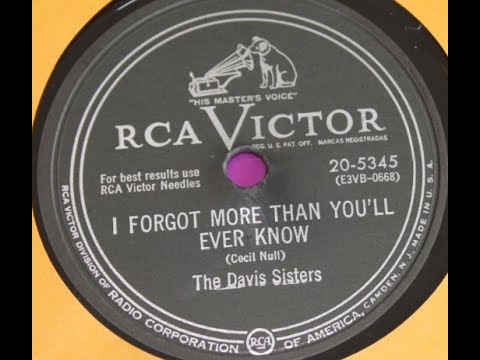 The song was an immediate hit eventually reaching #1 on the Country charts and #18 on the pop charts. At the time, this was nearly unprecedented and the term “crossover hit” wouldn’t be coined for another decade or so.

Now buckle in for the tragic part of the story. Shortly after the song was released, August 2nd, 1953, the Davis Sisters were involved in a car crash on the outskirts of Cincinnati. Betty Jack was killed instantly and Skeeter seriously injured. Ironically “I Forgot More…” hit #1 on the Country charts 2 and a half months after the accident and stayed there for 8 weeks only to be ousted by Webb Pierce with “There Stands the Glass.” You can read more about that song here.

Skeeter would later reform the Davis Sisters with Betty Jack’s older sister Georgia but it wasn’t quite the same and they never achieved the chart success of “I Forgot More…” They performed and recorded together until 1956 when Skeeter launched her massively successful solo career. She became a member of the Grand Ole Opry and last performed on the program in 2002. she passed away, a victim of breast cancer in 2004.

On to the answer song: whether Cecil Null had it in his back pocket the whole time, or seeing the success of “I Forgot More….” his publisher pushed him to write it, he came up with “I Found Out More than You’ll Ever Know.” He was under contract to RCA and they placed the song with Betty Cody whose recording hit the charts, but topped out at #10.

You can read more about Betty here but, short form, she was born Rita Francis Cote in Quebec. She was moved to Maine while a still a child. She met and married Country singer Harold “Hal Lone Pine” Breau. They were both, for a time, signed to RCA and achieved some success as solo acts and as a duo. They had four children, two of whom (Lenny and Denny) became professional musicians. She passed away at 92 on Canada Day 2014.

Tomorrow –  Betty Cody provides the answer to a song by the Tennessee Plowboy himself, Eddy Arnold.