Patsy Cline’s is the kind of success followed by tragedy story that you might find in a Country & Western songs, or a movie. In fact, there is one, and it’s a good one. It’s called “Sweet Dreams” and stars Jessica Lange as Patsy. If you have HBO, I think you can watch it on demand. If you’ve not seen it, skip this post and go watch it. You could do worse with your time. 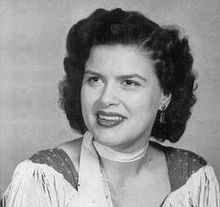 If the can’t find the movie here are the bare bones of the Patsy Cline story:

Country girl with a beautiful voice signs with a small record label and finds first success. (1955)

Leave the business after the birth of a child (1958)

While recuperating, and still on crutches, records her biggest hit ever… in a single take (August 1961)

Has, what turns out to be her final recording session (February 1963) 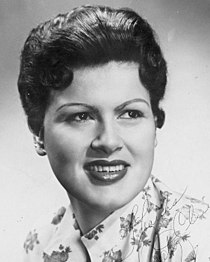 The song “I Fall to Pieces” has it’s own strange story. Written by Hank Cochrane and Harlan Howard, both songwriter/performers who met in California but later moved to Nashville. A demo was recorded by Harlan’s singing sister Jan Howard and they shopped the song around Music Row with little success. They were turned down by everybody from Sandra Dee (who thought the song was too country) to Roy Drusky (who thought it was too pop.) Patsy over heard producer Owen Bradley turning the song down on Drusky’s behalf, and asked to record it. When the time came, she almost backed out. First because Bradley had hired the Jordanaires to sing backup and she thought they’d drown her out. Once the session got under way, she almost backed out again when she discovered that there was no way to include her signature growls and yodels.

Her recording of the song was released in late January of 1961, and it took until April to hit the charts, only to begin the climb in history. It was August before it hit #1 on the Country charts and topped out at #12 on the Pop charts. Luckily, its tumble down the charts took as long as its climb up. Today, the song nobody wanted, that Patsy almost backed out of recording, is considered one of the greatest in not just Country Music history but American Music history in general.

The answer comes from Gerrie Lynn, a Country singer from Chicago, of all places. In 1964 and 65 she recorded a single each year for the small Nashville label. In 1966 she signed to Columbia and produced an album “Presenting Gerrie Lynn” and a single. Ironically, the album included a version of “I Fall to Pieces.” In 1967 she recorded one final 45 for Columbia featuring “Down Home Country Girl” backed with “I’ll Pick Up the Pieces” written by someone credited as E.Miller. And now I’ve told ya all I know ’bout that.

Pops Extra – proving, once again, that nothing was sacred to H&J. Tomorrow – In the kind of song that probably wouldn’t be recorded today, we learn the story of Mexican Joe and his marriage.