As Country & Western music was achieving greater popularity, and crossing into the mainstream during WWII, it’s no surprise that the immediate post-war years saw bunches of songs from the point of view of a guy, away from home, worrying about whether his gal would remain faithful. That’s the basics of this one, written in 1952 by Winston L. Moore. He performed under the name Slim Willet. He recorded it with his band, The Brush Cutters, for the small 4-Star label and it hit #1 on the country charts just about long enough for a cup of coffee. Ray Price recorded it for Columbia next. Considering, by this time, he was performing and recording with Hank Williams band, The Drifting Cowboys (who he called The Cherokee Cowboys), it probably should have done better, but topped out at #4. Then Skeets McDonald got a hold of it and he rode it to #1 where it stayed for an amazing 18 weeks! 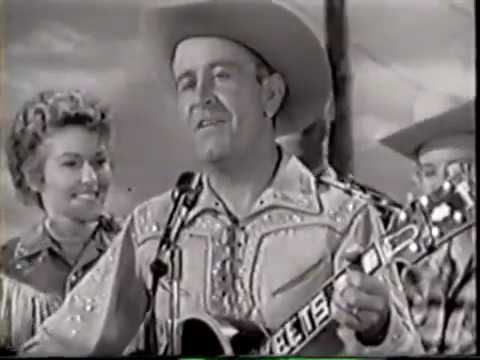 Born Enos William McDonald in Greenway, Arkansas, in the early 30s he followed an older brother to Detroit were he formed a band and performed on radio in nearby Flint and Pontiac. He was drafted in 1941 and served in Africa and the Far East. After the war was over, he headed back to Michigan where he performed again on the radio and dabbled in this new medium called television. He made his first records as Skeets McDonald for Fortune in 1950. At the same time he also recorded for London & Mercury as Skeets Saunders. (Yeah, that’ll fool ’em…..)

In 1951 he headed to LA where he became a regular on Cliffie Stone’s Hometown Jamboree and the legendary Town Hall Party. Though by this time his sound was more R&R than C&W, Capitol Records signed him to compete with Lefty Frizzell, who was ripping the charts up for Columbia. I suspect, when it came time to record this song, there was a major negotiation about the arrangement. The label probably wanted a straight C&W tearjerker, while Skeets wanted to rock out. They settled on a very happy middle ground and, to my ear at least, the result was something akin to Western Swing. Skeets continued to record for Capitol, and later Columbia but never achieved this kind of success again. He charted four more songs, the most successful of those topping out at #9. My favorites of McDonald’s catalog were among his first for Columbia and featured the work of, then unknown, guitarist Eddie Cochran. Skeets, without doubt, would have enjoyed a longer career had he not been taken by a heart attack in 1968. He was only 52.

[I’m currently looking of a pair of McDonald albums. “Skeets” issued by Sears in 1967 (Yes, Sears-Roebuck!) and a posthumous collection of his Fortune recordings called “Tattooed Lady & Other Songs”]

The song itself turns out to have had major legs, with the biggest hit being a version by Perry Como with The Ramblers. (Como sings Country. Don’t think about it too long, you’ll just get a headache.) Just searching my iTunes collection I find versions by Peter Griffin’s favorite, Conway Twitty, Johnny & Jack (Johnny was Mr. Kitty Wells,) George Jones, Boxcar Willie, Faron Young, The Browns, and more.

Let’s get back to Winston “Slim Willett” Moore. He collaborated on an answer song with singer Tommy Hill (though he gave the credit to his sister) and Virginia Subar. Tommy’s sister was the singer Goldie Hill, The Golden Hillbilly, who I wrote about in Answer Songs Part 6. Since the answer needed to be in a woman’s voice the inevitable took place. Tomorrow – We discover the identity of the woman who “walks these hills” in funereal garb. OK, that’s kind of enigmatic, but trust me, you know the song and you have never heard the answer.