A few weeks ago I was listening to Hillbilly at Harvard as I have every Saturday morning for decades. Cousin Lynn played a version of the fiddle tune “Maple Sugar.” He mentioned that there was a song written to that tune that he remembered from the singing of Doc Williams. That got my full attention as Doc and Chickie Williams were among my late father’s favorite artists. (He had even driven their tour bus for a time, but that’s a story for another blog entry.) He went on to say that he’d also heard a version of the song by Mac Wiseman, but didn’t know who wrote it. Turns out I did, so here we go. 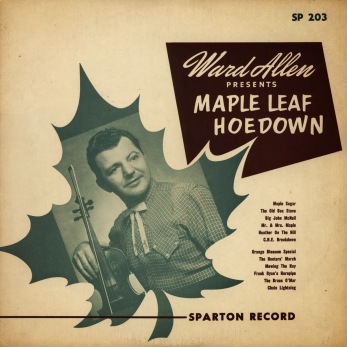 The song was written by Hank LaRiviere, who also recorded under the name Hank Rivers. He first recorded in 1939 and, due to the fact that he was in the Canadian Armed Forces at the time, became known as “The Singing Ranger.” In the 40s he was signed to RCA’s Blue Bird line, along with Wilf Carter and Hank Snow.

Though he may have recorded it earlier, the first recording of his song I heard was on an album originally issued on the Banff label in the 50s.

[Did you catch the reference to “Country King’ in the song. Notice the name of the band. Now go back and listen again.]

This album was later issued with a couple of added tracks (probably originally singles) on the Rodeo label.

Banff and Rodeo were among the labels own by George I. Taylor who was as slick a dealer as you find in the music business. As I’m sure was the case here, Taylor would sign as artist to one label, issue a small pressing, and then repress on another of his labels in a lager press run. Then he’d refuse to pay royalties on the larger pressing. (The Banff record was pressed in Canada, while the Rodeo issue was pressed in the US,)

Taylor also owned the Celtic label that issued so many great Cape Breton fiddle albums. Here his business practice was even more reprehensible. He would pay an artist one bottle of booze for a recording session…. at the start of the session. If you listen to some of the Cape Breton albums he recorded you’ll hear the quality of the playing falter on later tracks as, I’m sure, the level in the bottle fell. At the end of the session, the artist, being a little worse for wear, would sign away all future payment without really knowing it. Nice guy huh?

Back in the days before the internet, I always assumed LaRiviere was from New Brunswick or at least somewhere in the Maritimes. The Banff issue of this album had a picture from New Brunswick Tourism. (Taylor got these free…. cheap SOB, eh?) Hank also recorded songs like “Christmas in the Maritimes” and this one which was added to the Rodeo version.

I think what happened was that when his label mate on RCA, Hank Snow, achieved international success there was some pressure from the label to write “Hank Snow” songs and one of Snow’s biggest (in Canada at least) was “My Nova Scotia Home” so LaRiviere wrote “Singing Wheels”

Turns our LaRiviere was born in Hawksbury, Ontario and raised in Ottawa. Listen for the verse about being in Montreal “…near where I was born” in “Hank’s Traveling Blues.”

Hank LaRiviere passed away in 1996. From the fact that his family has asked that all proceeds from a posthumous recording of one of his songs be donated to The Alzheimer Society of Canada, I’m assuming that this terrible disease took his life at age 79.

If I may, and why not, it’s my blog, a couple of memories of my time in the sugar bush. I grew up in Upstate New York, and while Vermont may have the name for Maple Syrup, New York State has always outproduced the Green Mountain State. (Of course. now Quebec out produces both.)

There was a small sugar bush next to the house I grew up in, and every spring we’d tap the trees. This involved drilling a hole into the tree with a bit and brace. Hammering a spigot (technically a spile) into the hole and hanging a bucket to collect the sap which we boiled over an outdoor fire. When it was getting close to syrup consistency it was moved into the kitchen and the process was finished on the stove where there was a little more control of the temperature. Let me tell you the house smelled wonderful. Every once in a while there was a miscalculation and a batch would get beyond syrup stage. We’d then continue to cook it until just before it started to crystalize into Maple Sugar, at just the right moment we’d rush the pan outside and pour the results on snow. (Clean snow… no jokes please.) The result, we called it Maple Jack, was sweet, and sticky, and wonderful.

As a teenager, every spring I would work on Tyler’s Maple Farm. In those days the sap was collected in a vat on a horse drawn sledge (a type of sleigh or sled.) We always used the sledge and I don’t remember a spring when there was so little snow in the bush that a wagon was required. My job was to fetch the sap pails from the trees and dump the sap into the vat on the sledge. I always tried to work with Cy Coleman. In the parlance of those less enlightened days, he would have been considered “slow.” He subsisted on odd jobs, and the community looked out for him, making sure that he had enough work to survive and keep his old car running. Cy was a wonderful “concertina” player. I use quotation marks because this was not your English style concertina but rather a Polish style button accordion that was also called a concertina. Cy had a great repertoire of polkas, but Polish and German, and Irish tunes. My deal with him was that I would do all the work (the lifting and carrying) if he’d mind the horses and play tunes for me. A good deal for him and, at the end of the sap season, I was very strong.

When the sapping was done, and the syrup shipped, Mr. Tyler would use the now empty barn for a square dance. The piano would be wheeled from the house and Russell French would play the fiddle with his wife, Ethel, on the keyboard. Mostly Dicky Thompson would do the calling as long as the dance didn’t interfere with one of his regular gigs with his band, Dickie Thompson and the Driftwoods, at the Bell Hotel over by the D&H tracks. The French’s also played for the monthly square dance at the Grange Hall in town. In addition to playing the fiddle, Russell also played trumpet and led the town band. Almost every dance he’d pull out the trumpet for “Hot Time in the Old Town Tonight.” Russell was a farmer and sometimes when his hands would be banged up, he wouldn’t even bother with the fiddle but just play the tunes on the trumpet.

Mr. Tyler, who’s first name, if I ever knew it, I’ve forgotten, had only one rule. No Alcohol. This was strictly observed in the barn, but if you shook any of the near by bushes, they’d rattle with the bottle we boys had stashed in them. There was a fire pond near the barn. Most farms that were any distance from a water source had one in case of, well, fire. With all the booze in the bushes, as you can probably figure, before the evening was over, one or more of us boys would end up, full clothed, in the freezing water of the pond. This was never me. I could always “hold my liquor,” was, even as a teenager, over 6 feet tall and well over two hundred pounds, and, after a season in the sugar bush, was rather strong. 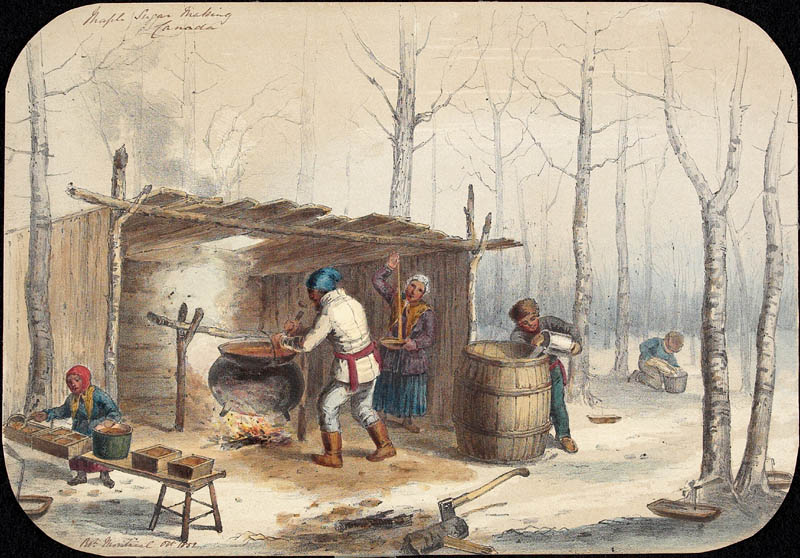