Yes, I am upset, and saddened, that today Trump admitted treason, again. After all, what did we expect. What I am most saddened by is that Russia had descended so far into syndicalism that Putin and his gangsters are willing to get into bed with Trump and his puppet masters: the capitalist criminals in the Republican party who have led our country to the brink of fascism and beyond.

I mourn for the Russian people who are the sons, and daughters, and descendants of the Soviets who stood so resolutely against Hitler’s army and it’s megalomaniac march east. Their forbearers opened the death camps and ended the holocaust. If you read history written from any point of view other than American, you know that the war would have been lost had it not been for their untold sacrifices. As Dick Gaughan wrote “one out of every three who died was Russian.”

I mourn for us as well. We are the sons, and daughters, and descendants of men and women who sacrificed so much during WWII. Not only in Europe, Asia and Africa but at home as well. Our forbearers fought the “war to end all wars,” and while it did not, it was still a victory for freedom. Some of our ancestors fought in the American Civil War so that others might live free. Our predecessors left their homes to come to this country with one goal in mind: Freedom. We are the descendants of the farmers who took up arms on the fields of Lexington and Concord. I morn for us as our President makes deals with gangsters, and lies about it, not only to us, but the world as well.

The memory of those children, taken from their parents and put in cages haunts me. How do we explain this to the generation, American and Russian, that opened the Nazi Death Camps. Our President openly describes other sovereign nations as “shit hole countries” and we let it pass. How do we explain this to the generation who, both American and Russian, fought and died to bring an end to Hitler’s Final Solution. We betray their sacrifice with every act by Trump and his criminal cronies, when we don’t stand up, as a people, and say enough!

We are not on the road to fascism. it is at our very door. It’s harbinger, hatred, burns across our land. the flames fanned by the evil men who have so corrupted not just the Republican Party, but every branch of our government. Saying “not in our names” is no longer enough. We must stand up to the fascist who no longer wear Brown Shirts, but clothe themselves in Brooks Brothers suits.

Not Again, Not Now, Not Ever.

Here are two songs by Dick Gaughan, who was prevented from entering our country for many years because of his political beliefs. The first song is dated, having been written during the Cold War, but the truths of both songs still hold. 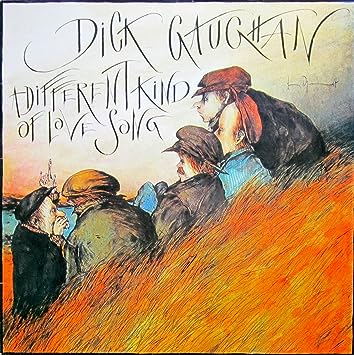 While listening to “A Different Kind of Love Song” just now, I was remind of the words of Woody Guthrie who said “It’s a Folk Singer’s Job to comfort disturbed people and to disturb comfortable people.”