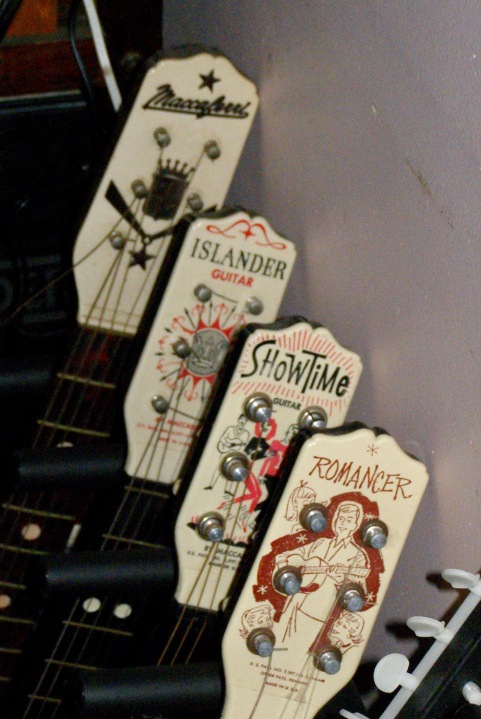 One morning in the early 70s, for some reason I don’t remember, I was walking down Mass. Ave. in Cambridge. The Music Emporium had yet to move to Arlington and as I passed, I glanced in the window. There I saw what I thought was the most beautiful guitar I’d ever seen. Looking closer I saw that it was an F-hole, archtop with a single cutaway away and, amazingly enough, seemed to be made out of plastic. There was one sitting on a guitar stand next to several more in cardboard boxes. The sign said they were Maccaferri Guitars, and the price was, as I remember, $225. It was probably just as well that Eric hadn’t opened for the day or I would have bought one then and there. As it was, I continued on my way and probably ended up buggering off to Atlantic Canada (which I did a lot back then) or disappearing under the hood of whatever car I was restoring (I still had the garage at that point.) Either way I forgot all about it for a couple of decades.

Turns out, at one point Maccaferri had stopped all production and ordered all completed instruments (and some parts it seems) warehoused. This was in the late ’50s and some 20 plus years later, when he decided to retire, he sold everything off. That’s how the Music Emporium ended up with NOS, MIB (to use eBay jargon.)

It strikes me, as I write this, that Mario inadvertently made out well financially on this deal. It certainly was not his intention. He ended production in a fit of pique… and that’s a story for another time. Let’s look at the economics. His pricing system was a simple one. The suggested retail price of the G-40 was $39.95, the G-30 was $29.95 on down to the G-5 priced $4.95. (Remember these are 1950’s dollars.) For simplicity sake, let’s assume a 100% retail mark up. That means that a G-40 would have netted Maccaferri 20 bucks. Still assuming a 100% markup, that means that the Music Emporium probably paid. somewhat over $100 a piece. So, Mario made $80, or more, per guitar just by storing them for 20 years.

Now let’s fast forward to the 1990s. I’m poking about on eBay (as one does) and was probably looking to see how much my Gibson L-3 might be worth, and there was the guitar I’d seen in the Music Emporium window. The brief description of the guitar and Maccaferri himself had me hooked, so I bid…. and won. Let’s just say that I payed more than the $39.95 I would have paid had I bought one new in the 1950s, but less than I remember the Music Emporium asking for them. Once I go down a rabbit hole I go all the way down, and my collection of his guitars is in double digits, and that’s not to mention the ukes of various sorts, plus original shipping boxes, spare tuning pegs and such.

Over the next few weeks I’ll be doing postings on individual models with pictures and technical details. At some point I’ll post a bit more about the man himself, but for now let me close this post with some music. A few years ago, Ed Gerhard did an album, House of Guitars, using what he termed “Thrift Store Guitars.” I think this means that either Ed spends more time in thrift shops than I do or, he knows better ones. Actually he says that none of the 12 guitars and 1 bass used on the album cost more than $200. That’s probably true considering the album was done in 2001. Now a Maccaferri G-40 like the one on the album sells on eBay for between $800 and $1,200 depending on condition. The Maccaferri is the one in the center square on the cover.

In addition to the Maccaferri G-40 this track features a Harmony Sovereign, an Oahu Hawaiian and a Danelectro Bass. By the way, the cheapest Danelectro basses on eBay currently are $400 plus. Apparently the price on those has gone up almost as much as on the Maccaferri.

You can find more about Ed here.